It needs wisdom of heart to make a decision like his! Harikiran - He makes us PROUD!!! 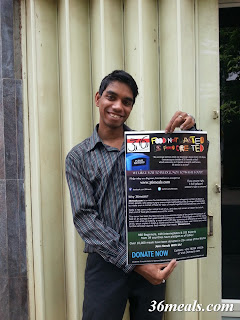 It was a fine morning just like any other for Harikiran as it was for any one else across the globe. He was excited to be reading a book as it was a part of his task and his to-do, to build better leadership in himself. During this time, the book somewhere happened to mention the facts about the no of people who are hit by the aftermath of being starved, about some who are not blessed to see food for days between every meal they get fortunate to consume, and about others who die in search of one morsel of food.

On this fine morning everyone at his house had gone out for various reasons and he was home alone. He was triggered deeply by these lines and left pondering. He was moved to an extent not many youth at this age feel moved reading something like this. While many just give an expression of "Oh God! How sad!" and they continue reading, he decided something different. He took a decision to make a difference.

It was about lunch time for him just when he came across these lines that changed him as a man forever and he decided to move out of his house and make a difference to at least one life. He decided not to eat himself, until he became a reason to kill the hunger of at least one person. He took his bike and moved around the streets of Bangalore city(in India).

While on the move he saw many who looked like they hadn't eaten much, but eventually he found 3 people by the road side, in a complete slum area and he knew they truly deserved his attention. He spent his pocket money, which he would otherwise, like everyone else, spend that on coffee days, movies and other such stuff, and got them 3 meals.

He made sure they consumed hot meal and were satisfied to have seen food. He was blessing in disguise for them. While there are millions of them who have not seen food for months, are not sure if they will ever get to see someone like Harikiran in their lives, there are another few who would be dead out of hunger before you complete reading this article. 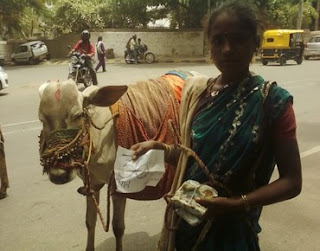 If you truly feel this inspired you to make a difference, GO ahead and DO IT. For, every single person you inspire through this story, there is one more person, poor and needy, we hope and believe will be taken care off. Feel free to share this story with all you know and may more Harikirans be born out of this story.

If you are in some part of the world where you do not think you could find people to help, feel free to contact our TRUST 36meals@gmail.com | www.36meals.com and we will do the needful. For every 36 INR you contribute, we will make sure one person is given the privilege of being fed!